The Bensousan brothers were born in Thessaloniki. They were jews. And in 1943 the Nazis were there around ... 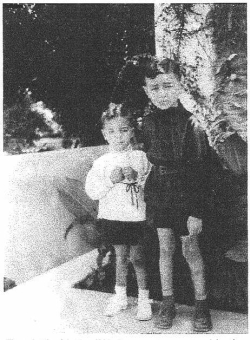 “Until 1940, the year l started school," says lakov, "life was good. My father was an electrician and my aunt’s husband was an accountant at Austro-Helleniki, the big tobacco traders of Thessaloniki. That is also what saved us, as my uncle was of Austrian descent through his mother, and a catholic too. His father, whose surname was Saridakis, was from Crete. When he and my aunt were married in 1938, she converted to Catholicism. Our mother died in July 1940 and our aunts took care of us as we were motherless.

"When the war broke out our father fought at the Albanian Front. ln the summer of 1941 he came home, on foot, via Nafplion! Right after this, in 1942, he joined EAM [Resistance organisation]. My father was a staunch believer in communism.

“When the persecution started in 1943, he and his brothers decided that we should leave. We left our family home taking mattresses, bedding and food with us and all crammed into a house on the corner of Belissariou Street and Bizaniou Street. There were twenty to twenty—five of us, cousins included, and my brother and l were the youngest. We stayed there for three or four days. We were lucky because on the fourth day the house in Konstantinoupoleos Street was raided.

After this our aunt came in the night and took us back, as the house had been declared ‘clean’ and the Germans would not come again. My father brought all the bedding back and then left for Kozani, before taking to the mountains with the resistance. None of the others wantted to go with him as they had wives, children and parents to look after. This tight bond between families was the reason why so many lives were lost.

“Our father came back to see us in the summer of 1943. He was on a mission to get spare parts for their wireless from an anti-fascist ltalian. He stayed with us for about ten days and came to see us again in 1944.

“We stayed in the house where we were hiding from  the spring of 1943 until liberation. We never left the house, never went into the garden or close to a window. Though the curtains were drawn, we never went within two metres of the windows. The people in the neighbourhood knew us, but we did not know which of them were our friends and which were our enemies. One of our neighbours, Panagiotis, was secretary at the 2nd Police Station. He got us identity cards with Greek names on them. My name was Giannis Saridakis.

People still call me Gianni to this day. Not only did Panqiotis get the identity cards for us, he also taught me to read and write.

“We left the house on Saint   Day (26 October)1944. My aunt had vowed to light a huge candle at Agios Eleftherios Church as soon as the Germans left. She took us with her although there were still a few Germans about, going around on their motorbikes with their machineguns in the basket. This is why I always say that I was born in 1934, but reborn in 1944.

“By the time we got back home in the evening the Germans had all gone, the resistance men had come down from the mountains and were out and about in town. That’s when we really realised that we were free again.

’We waited for our father to come back, telling ourselves that he was in Kozani so it would be some time before he arrived. A week went by. Two weeks went by and still we waited. We went to the Offices of the Third Army where the resistance headquarters were. The secretary opened his record book and searched through it. ‘We have no information’ he said.

"Some time later, when the war was over, we met some people we knew and they told us he had been killed."