(...) Yes indeed I have heard of our name spelled Saridaki, Psaridakis, etc. We may be indeed related to Venizelos, however, I am not quite sure. Perhaps you are familiar with a little of our family history.

Accordingly the story goes as follows; When the Byzantine general Nikiforos Phokas, who was later to become an Emperor of Byzantium, freed Crete from the Arabs in 961, he became concerned about the low moral standing and religious beliefs of the population after 137 years of Arab rule. This, combined with unrest by the local population against the new Byzantine administration prompted the Emperor Alexios I Comninos, towards the end of the 11th century, to send a number of prominent Byzantine families from Constantinople to settle in Crete to improve the control over the local population and raise the moral and religious standards in the island. 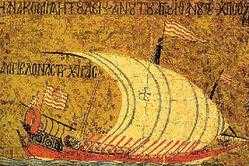 It appears that this was not effective as a century later, under the reign of the Emperor Alexios II Comninos, great-grandson of the Alexios I, an other large contingent of nobles from Byzantium arrived in Crete and they were also allocated significant property rights and administrative positions. Their arrival has been known for centuries as that of the story of the twelve Archondopoula (young rulers). This event has been the subject of some controversy amongst historians over recent years. The story, or the myth according to some, is detailed below.

The Emperor Alexios II Comnenos, disturbed by the continuing unrest in Crete sent twelve prominent Byzantine families to Crete to re-establish strong links with Constantinople and improve the religious, moral and economic standards of the community. In a document, called the “Chrysovoulo”, a document sealed with gold to authenticate the Emperor’s signature, the Emperor, after threatening the Cretans with severe punishment if they were not to fully submit to his will, said that he was sending them as king and trustee his son, Isaakion, together with twelve Archondes. The current historical debate relates to the document’s authenticity and the date at which it was issued, amongst others.

The families that were named in this document, and which became prominent in Crete’s history, were those of Ioannis Phokas (the family’s name changed during the Venetian era to Kallergis. See also the palace Vendramin Calergi on the Canal Grande in Venice), Marinos Skordilis, nephew of the Emperor, Philipos Gavalas, Thomas Archoleos, Eustathios Chortatzis, Leon Mousouros, Constantine Varouchas, Andreas Melissinos, Loukas Lithios, Nikiforos Argyropoulos, Dimitios Vlastos, and Matheos Kalafatis, all of them heads of families which contained anything up to and other eight male members.

Large areas of Crete were allocated to each of these families and their names are reflected today as place names in numerous locations in Crete, such as Skordilo in Sitia, also in Mylopotamos near Rethymnoν, Kallergiana in Kissamos next to Kastelli, and Kallergo near Rethymno, there is also a Kallergis mountain peak in the White Mountains, and many other locations are reflecting the names of the Archondopoula with the location name either ending in –ana, e.g. Kallergiana or using the possessive “of…”, e.g.“tou Kallergi”or “tou Skordili”. Their family crests can also be found on churches and monuments all over Crete and members of these families are prominent members of today’s Greek community. The same names appear numerous times in Crete’s turbulent history over the next few centuries as many of them played prominent roles in great historical events.

Because of the absence of the original documents relating to this settlement (only Venetian records of supposedly translated Greek records or Greek translations of earlier Venetian documents exist) and possible errors of the translated documents, a view exists today that the document and its associated story was a fabrication by members of these same families in order to convince the Venetians of their aristocratic status and thus secure for them a place within the new political elite. What is not disputed though is that these families that arrived in Crete from Byzantium were all from prominent noble Byzantine families and that when they settled on the island they formed the new elite that was to play a prominent role in Crete from then onwards.

Their prominence survived the centuries, especially during the Venetian rule era. The families of the descendants of the twelve Archondopoula as well as those of the first group of Byzantine nobles were granted certain privileges by the Venetians, the latter group referred by the Venetians as the “Archondoromeoi” (the Byzantines were known as Romeoi -from the Eastern Roman Empire- and Archon, the ruler) and both were part of the “privilegiati” or privileged class, which included also all priests and all Sfakians, the latter all being considered by the Venetians as descendants of the Archon Marinos Skordillis. Suffice it to say the wealth and power of these Byzantine Families was enormous then and would be even more enormous today.

What the name Saridakis was changed from is uncertain. (...) I will advise you of archeological proof of our long noble history, and perhaps we can begin to understand who, what where, when and how our family name changed.