Information obtained by the Austro-Hungarian Army Archives of Vienna 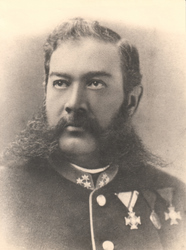 Franjo (Franz, Franc) Stipić was born in Carlstadt (Karlovac, 56 km South West of Zagreb, Croatia) on 12 September 1835. Son of middle-class parents (Bürgersohn), on the 12th March 1849, in his 14, joins the Austrian army as “Expropriis Gemein” (note 1) in the 4th Infantry Regiment Sluiner, in Croatia, at the oriental borders.

Catholic, brown eyes and hair, he is 67 "Zoll" (note 7) (m1,70) tall, speaks Croatian, German and Italian. He follows a three-year course at the military school for mathematic sciences (Unter-Realschule) in Turn (note 2) with good results.

After five years (1854) he obtains the rank of 2nd class Lieutenant (Leutnant 2. Klasse), so starting his military career which will progress up to the rank of 1st Class Captain (Hauptmann 1. Klasse, in 1877).

In 1859, at the age of 24, he fights against the French-Sardinian army in Melegnano (note 3), then participates to the battle of Solferino (note 4), 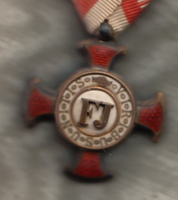 on the 24 June of the same year (Italian second War of Independence). For his courageous behaviour in the fight he earns the Merit Cross (Verdienstkreuze (note 5)).

In 1866, at the age of 31 he is again in Italy (third War of Independence) but does not participate actively on the field.

In 1878 he is 43 years old and fights in Bosnia, in Šamac and Gradačac (note 6) as Company commander.

One year after, January 1882, he marries Maria Kaučić in Pregrada (Zagreb). On 31 May 1883 welcomes the birth of his daughter Ljubica Amalia Maria Clotilde who will eventually marry Reginald Fesch.

On 1st January 1886 his second child Richard, in Pregrada is born. On 25 November 1888 his second daughter Katharina Maria Franziska, who dies one year later.  On 14 December 1891 he has a third daughter, Stephanie Antonia in Prague.

(1) Only the sons of military officers could usually access the military career. The civilians could enter with the qualification od “Expropriis Gemein”. They should provide to their own equipment with “own means”.

Throughout the latter half of the nineteenth century the forces of Austria were involved in numerous external wars and additionally were involved in the rebellions in Hungary, the Northern Italian provinces and police actions in the Balkans. At the conclusion of a particular round of hostilities the Ministry of War would publish a Circular Order or Circular-Verordnung which listed all the official battles, engagements, skirmishes etc with their associated dates. These events, places and dates were then taken into official use for all future historical reporting and submissions for awards and decorations. A table providing the translations of the terms used in the individual lists is found below.

(4) The battle of Solferino (24 June 1859) was fought between the Austro Hungarian and the French-Sardinian armies concluding the Italian Second War of Independence. Together with the Battle of San Martino it has been the biggest fight, after Leipzig in 1813. More than 200.000 soldiers alltogether participated to the battle..

After the defeat of Magenta, the Austrian army was retiring eastward. The Emperor himself, Franz Joseph, took the command personally, after firing the General Gyulai, who was considered responsible for the defeat.

The battle was the longest and bloody fight of the Independence wars. The Austrians lost 14,000 soldiers, and 8,000 were seized prisoners. The French-Sardinians 15,000 and 2,000 prisoners. Due to this carnage, Napoleon III signed the armistice in Villafranca. Austria was forced to cede the Lombardy to Napoleon, who gave it back to the Kingdom of Sardinia.

On his 25th jubilee in December 1873 Kaiser Franz Joseph I. instituted a so-called "Kriegsmedaille" (War-Medal). The medal shows on the obverse side the Kaiser's head surrounded by a laurel wreath and on the reverse side the date "2.December 1873" (those showing the spelling Dezember where produced after 1900). It was suspended from a ribbon with the Habsburg-colors black and yellow! The medal was given to all personnel who took part in a minimum of one action since 1848. Later this medal was also given to all personnel who took part in each completed campaign until the Kaiser's death in November 1916. Beside this general war service medal there was only one medal instituted for a single campaign. This was the "Erinnerungsmedaille an den Feldzug 1864 gegen Dänemark" (Denmark-War-Medal). This small medal was introduced jointly by the Austrian Kaiser and the Prussian King and was made from the bronze alloy of the cannons captured in the Danish fortress Friedericia. The medal was given to all men of the German Austrian forces who were engaged in this particular war. The reverse shows the words "UNSEREN TAPFEREN KRIEGERN 1864" (to our brave warriers 1864) and the obverse side shows the crowned initials of the Austrian Kaiser (FJ) and the Prussian King (W). The ribbon show the colors of both countries. The Austrians received the medals with the "FJ" on the left and a yellow/black/white ribbon and the Germans received it with the "W" on the left and a white/black/yellow ribbon."

(6)   Bosanski Šamac: The city was part of the old Ottoman province of Bosnia by the time it was incorporated in the Austro-Hungarian Empire at the end of 19th century. After the I World War, the city passed to part of the Kingdom of Yugoslavia. From 1929 to 1939, it was part of Drina Banovina; and from 1939 until 1941 it was part of the Banovina of Croatia. During World War II, Bosanski Šamac, as all the rest of Bosnia-Herzegovina, was included into Nazi-controlled Independent State of Croatia. After 1945, the city was reintegrated within the Socialist Republic of Bosnia and Herzegovina in Tito’s Yugoslavia.

The town lies on an important strategic position – the corridor connecting north-western and south-eastern parts of Republika Srpska, near Brcko and bordering the two FBiH’s exclaves at the frontier with Croatia. As with most other places under their control, Srpska authorities removed the “Bosnian” adjective from the town’s official name. Bosniaks and Croats continue to refer to it as “Bosanski Šamac”.

The župa of Gradačac was first mentioned in 1302, while the town's first written mention dates from 1465 (also as Gračac). The town became part of the Ottoman Empire in 1512, its nahija (municipality) was first recorded in the defter of 1533, while its kadiluk (county) was recorded in 1634.

In 1701 the settlement was given the status of a palanka (city), and it became the headquarters of a military captaincy in 1710. The captains of the Gradaščević family led the development of the city, and the most famous of them, Husein-kapetan Gradaščević or Zmaj od Bosne ("Dragon of Bosnia"), led an uprising that raised to arms most of the Bosnian captains in 1831.

The town has a fort with 18-meter high walls built between 1765 and 1821, and a 22-meter high watchtower, built in 1824 by the Ottoman empire on foundations made originally by the Romans.
According to the 1910 population census, the majority in the district was held by Orthodox Serbs - 35.90%. Gradačac became part of the Tuzla Canton in the Federation of Bosnia and Herzegovina after the war.