After the defeat of Austerliz the Austrian Empire tries again to contrast Napoleon's overwhelming power in Europe. In 1809 a so-called Fifth Coalition is formed by Austrian Empire and the United Kingdom against French Empire and Bavaria.

Major engagements between France and Austria, the main participants, unfolded over much of Central Europe from April to July, with very high casualty rates. After much campaigning in Bavaria and across the Danube valley, the war ended favourably for the French after the bloody struggle at the Battle of Wagram (today Deutsch-Wagram, Austria, north-east of Vienna) in early July.

The resulting Treaty of Schönbrunn is the harshest that France had imposed on Austria. Metternich and Archduke Charles obtain the preservation of the Habsburg Empire as their fundamental goal. Nevertheless, while most of the hereditary lands remain part of Habsburg territories, France receives Carinthia, Carniola, and the Adriatic ports, while Galicia is given to the Poles and the Salzburg area of the Tyrol go to the Bavarians. Austria looses over three million subjects, about one-fifth of her total population.

Almost at the end of the campaign, on 17 May 1809 the French army, under the command of General Schilt enters Trieste and captures British ships and goods in the harbour. On 25 the city is officially declared under French government.

The administration is given to the commissar Joubert who, by order of Napoleon, asks for 50 million Francs (!). After resistance and complaints ... the 50 million will be reduced to 12.5 and will be paid in instalments.

On the 6th July a militia of volunteers and peasants tries to liberate the city, with the support of a British freight. Unfortunately the attempt has no effect but some fifty casualties between deads and wounded.

This is also the day of the Wagram battle … and the city is imposed a new reward of 2.5 million Francs. 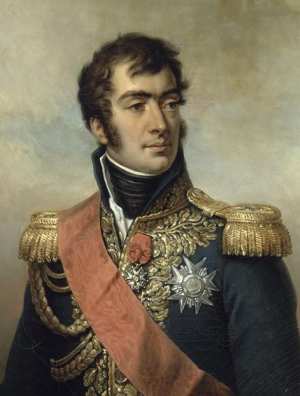 On the 14th October the treaty of Schönbrunn states the cession to France of all Adriatic territories, including Trieste. Eleven “Illyric Provinces” are created under the government of Marshal Auguste Frédéric Louis Viesse de Marmont, 1st Duc de Ragusa

With the decree of 4th July 1810 Marmont reorganises the scholar system into primary (Elementary) and secondary (Lyceums) schools. Every village must have an Elementary school, every town Council a Gymnasium and every Country town a Lyceum. Trieste will have four elementary schools, one Gymnasium and one Lyceum, all of them in Italian.

On the 24th November 1810 the Free Port of Trieste is abolished and substituted by a royal depository.

The star of Napoleon is however fading and dimming. On the 24th June 1812 Napoleon crosses the Russian river Njemen with 500,000 soldiers … to come back on the 10th December with less than 37,000.

In August 1813, Austria, together with the 6th Coalition, again declares war on France. Austrian troops led by General Franz Tomassich invade the Illyrian Provinces. Croat troops enrolled in the French army switch sides. Zadar surrenders to Austrian forces after a 34-day siege on 6 December 1813. At Dubrovnik an insurrection expels the French and a provisional Ragusan administration is established, hoping for the restoration of the Republic. It is occupied by Austrian troops on 20 September 1813.

On 2nd November 1813 Trieste, after a harsh resistence of the French troops against the Austrian army supported by a heavy bombing of the British fleet ... surrenders and rejoins the Austrian Empire.

The traces of that bombing are still visible on some buildings in town.