Trieste has been occupied three times by the French army. This is the story of the first time.

We are at the end of the Campaign of Italy started by Napoleon against the Austrian empire in 1796.

After having occupied Milan and the Lombardia (may 1796), the French army proceeds eastward and eastward ...

Under the pressure of the French army, on March 1797 the archduke Carl, the Austrian commander of the Adriatic area invites the citizens of Trieste to organise a defense ... and on the 20 he flees to Fiume. The same day Count Brigido, the Governor, together with other authorities retires to Ljubljana, leaving the city in the hands of the municipal guard. After the retirement of the highest authorities, part of the population hurries out of the town to the point that Napoleon, on March 23 sends a proclaim beginning with "Une terreur injuste précède l'armée française ... rassurez vos concitoyens ...". The municipality sends him a delegation formed by two nobles and two merchants, the two souls of the city.

The same day, March 23, 1797 Joachim Murat enters Trieste ... and confiscates the city safe with 21,000 francs. The general Dugua establishes himself at the "Locanda Grande", the best hotel in town and hoists the French flag on the castle of S.Giusto and the City Hall.

On March 26 Napoleon asks for a "contribution" of three million livres tournoises, half cash and half in goods. As a result the municipality is forced to increase the taxes. In compensation, the French declare freedom of trade with all the nations not at war with France and confirm all the magistrates and the Austrian rules as well as the freedom of religious faith.

At the end of the month, most of the people who had left the city are back. On 10 April General Dugua leaves the city and moves to Klagenfurt. He is substituted by Gen Bernadotte (who will eventually become the king of Sweden). The military commander of the castle and of the harbour is col. Bréchet. On 7th April Napoleon and the Austrian Emperor Franz II sign an armistice in Judenburg. 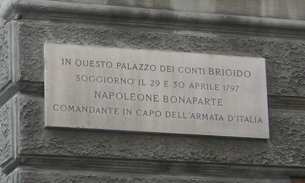 The occupation provokes some fightings and resistance, but the situation is stable until the arrival of Napoleon himself on the 29 and 30 April. The city magistrates try to obtain from him a reduction of the contribution ... but without result. To please the merchants, Bernadotte declares freedom of commerce with all ... but English and Venetians.

In the meantime, on the 12 May the Venetian "doge" (duke) Ludovico Manin surrenders unconditionately to the French army and abdicate himself, while the Major Council, after thousand years of independence, declares the end of the Serenissima. According to Bonaparte's orders, the public powers pass to a Provisional Municipality under the French Military Governor.

In Trieste, on the 24th May, owing to the treaty of Leoben, which precedes and anticipates the treaty of Campoformido, the French army retires and the Austrian rule, represented by the Count Brigido, is back to town.

On October 17, France and Austria sign at the Villa Manin the so-called Treaty of Campoformido by which the Republic of Venice is annexed to the Austrian state. This treaty gives Austrian recognition to the existence of the Cisalpine Republic (made up of Lombardy, Emilia Romagna and small parts of Tuscany and Veneto), and annexes Piedmont to France.