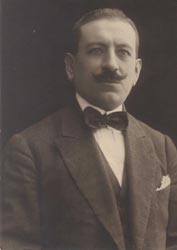 from the "Encyclopédie biographique de Turquie - 1929"

"Frenchman, born in Salonica in 1879. His father, M. Antoine Saridaki has been one of the first employees at the Ottoman Bank in Salonica, when they opened a branch in this town. After his studies in Belgium M. Alphonse Saridaki has also joined the Ottoman Bank in Salonica in 1895. At a further stage he has been managing the new agencies of the bank in Monastir, Kutahia, Sivas and presently Konia"

Alphonse is the son of  Antoine Saridaki, Greek, and d'Adèle Dobrowolska, of Polish origin but under French protection because of his father right from his birth. Also Alphonse, like his brothers and sisters, he enjoyed the French protection. His official enrolement as "protégé français" at the consulate of  Constantinople dates from 1903 under the number 221. 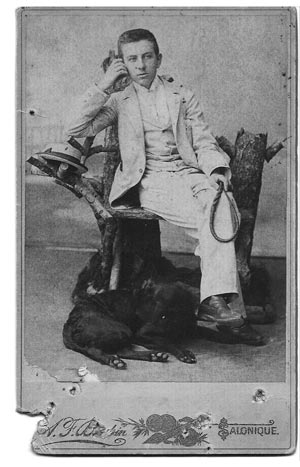 In 1895, after having come back from Belgium where he studied, he joins the Ottoman Bank of Salonica, one year before the retirement of his father, equally employed in the same agency.

In 1905 he marries Emilie Rossi, second daughter of  Paolo Rossi (see topic). The couple settles down in Monastir (Bitola) where Alphonse is the manager of the local branch. There they have their first child. The three others will be born in different Turkish towns where Alphonse will move as branch manager.

In 1931 he is appointed Director in Istanbul where will end his carreer in 1937.

Besides that, in 1926, the whole family, Alphonse, Emilie and their four children ask and obtain the French citizenship. The two sons will study in France, in Nogent sur Marne. Henri Saridaki, brother of Alphonse who already lives in France will be their "correspondent" and affectionate local uncle.

IN 1939, just before the war declaration, Alphonse, his wife Emilie and their joungest daughter Renée leave Istanbul to Bordeaux where Alphonse will die in 1943.