Change of the name Ljublich

Our Jublich from Saloniki came from Ragusa. They appear for the first time in the records of the Catholic Parish of the Immaculate Conception in 1763.

The reasons of the change

First the Slavic name might explain the variance in writting. The first letter of the name is probably the letter that corresponds to lj and is pronounced [λ] equivalent of "gl" in Italian or "ll" in Spanish, but it does not exist in French "i wet".

In Croatian, the word Ljubav means "love" and the suffix "ich", or better "ić", is the patronymic "son of".

Then, our heroes have their own constraints. They are probably illiterate. Neither Peter nor Anna can sign their records. At weddings, one as well as the other, file their mark: a cross.

They are therefore limited to pronounce their name so that the priest could write it. Note that if they could write Greek or Cyrillic, they would sign with this writing, which is not the case. Antonio 1st, however, knows the Latin script. Like Antonio 2nd.

There is still the priests, according to their cultural field, their spelling, their hearing, their willingness, their possible dyslexia and their writing habits, do what they can. With the change of celebrants, we have four different entries in five records.

It is unclear whether it is writen Jublich or Yublich, and it is likely that the transcribers had hesitated. In the first record, however, comparing the first letter of the husband Jean gemeliavi with the letter of the surname of the father of the bride, we cannot hesitate to choose the J. But at the death of Anne, it should be noted that the surname of her husband, Jean became... Jani or Yani? (Γιάννις - Yannis in greek).

Finally, in the records that we found (and they are few on that name), the boys' names Antoine/Antonio and Pierre/Pietro are exclusively used in both groups.

The branch Jublich/Yublich/Glubich disappears in the records with the death of Pietro. It's therefore safe to assume that our family group Gliubich (whose first appearance in 1790, ten years after the death of Pietro Gliubich) is related to this group Jublich. The evolution suggest a merger of orthographies, which allows us to speculate they are in fact descendants or collaterals.

Pietro, the father of Anne et Antonio/Antoine (assuming he was born about 1760, Anne was 20 years old)

Or Anne daugther of Pietro, a single mother of Antoine 2nd. She then married Jean Gemmelavi

Or Antoine 1er and Anne are brother and sister. Pietro is the father of both.

Or Pietro is the brother of the father of Antoine 2nd. This brother could also be called Antoine, an be the one who signs at the marriage of Anne.

Evolution of the names through the records 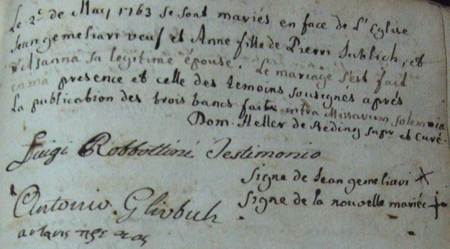 Anne is about 20 years old

they do not sign, neither one nor the other.

She underwent colics. The family called the doctor, but he didn't know what to do, thinking it was indigestion. And nobody think to call the priest! So, she died without Sacraments, but it was only a fortnight she had made her Easter Communion.

The celebrant is JB Mouturez, Curé

If he is really the husband of Marietta Romana, Gublich became Glubik or something like that. (the name is difficult to decipher, because of the spots).

Antonio Glivbuh (Antonio 1rst) at marriage of Anne Jublich and Jean Gemelavi. It could be Glivbich, but so, Antonio would have forgotten the point on the i.

It is difficult to think it is our Antoine Gliubich because he was supposed to be born in 1760.

We can see that these signatures are quite différents, especially the letters A, N ant G. They are not formed in the same way.